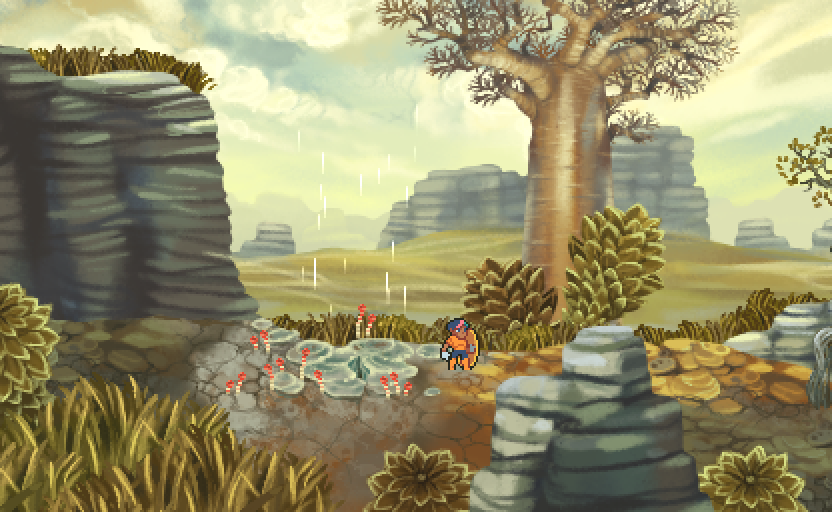 NOTE: The following reflections reveal significant plot aspects of Even the Ocean. I think it's fine to read before playing, but it's up to you!

Should art inspire hope? What are the mechanics by which it could?

Even the Ocean is a tragedy. In a way, I don't think I could ever write a story quite like this again. It is full of quiet, impotent sorrow; a sophomorically stubborn refusal to take the easy way out in any aspect of its production (the engine, the art style, the story, the mechanics...); and a desperate, unfulfilled search for meaning in the void of failed institutions. While I still face many of the same problems as then—both internally and externally—by now I've developed a more stable sense of personal and political identity, and Analgesic Productions as a studio has consistently moved towards a smoother, more intentional workflow. While we will always try to stretch ourselves to create challenging and non-dogmatic stories, it's hard to imagine recreating the particular circumstances that birthed Even the Ocean.

Melos and I were reflecting recently on how people react to art that feels difficult, negative, or unresolved. We mentioned how our parents' generation sometimes has a certain ethos of wanting art to be "redemptive", "uplifting", or simply "entertaining" (these impulses can easily be framed within religious or secular, conservative or liberal flavors). The idea is that art transmits the qualities of what it depicts into the world. E.g. "This movie showed something bad and made me feel bad: it increased the overall badness in the world." It's not difficult to explain how limiting this is, but the issue is not as simple as it first seems.

Media is all around us, and I actually do think that it's really important to ponder what we think makes the world better or worse! In most cases, not to come to a definitive resolution about any particular work, but rather to develop guiding principles for where we invest our time, energy, and attention. In my experience, it takes ongoing re-evaluation to avoid simply settling for an aesthetic—whether that be the surface-markings that appeal to one's faith, conservatism, liberalism, wholesomeness, leftism, queerness, or whatever else. It's really not just about "the older generation" after all! 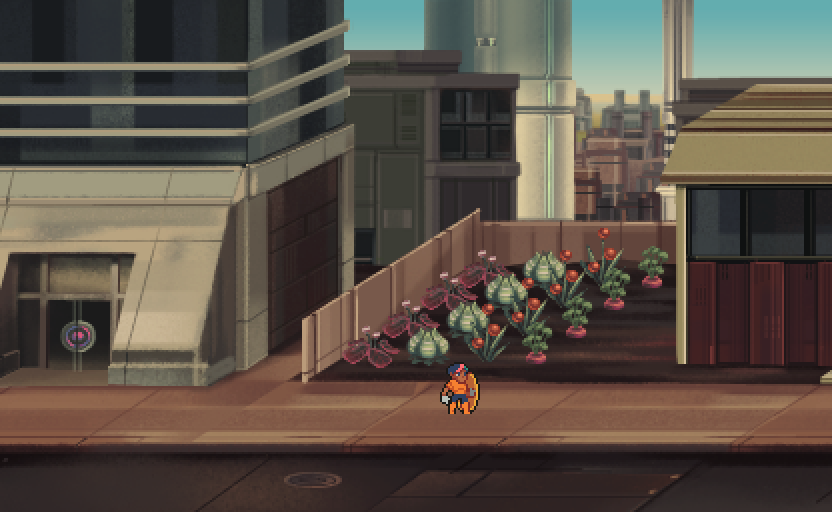 All of this is a bit of a tangent, of course. Occasionally people have taken issue with Even the Ocean's story, but it's far from a benchmark of darkness or controversy. Nonetheless, I'd like to honor Even the Ocean for how it is likely to stand unique among Analgesic's catalog: a game with the courage to be desperately uncertain, chronicling the painful gap between knowing that something is deeply wrong, but not yet having found its replacement.

Happy 4th Birthday, Even the Ocean!

Melos here! So... it's been 4 years, huh? Since then, I've gotten older. Other things happened, too. But I'm here to talk about Even the Ocean! It's out on PS4, XB1 and Switch now! It's also out on Steam, GOG and Itch! Okay, advertising mode over...

I've meant to replay Even the Ocean for a long time, but I haven't fully since before it released. When I think back on Even the Ocean's 3.5 year development, there's a wide range of emotion. Of course, there's a lot of good. There's a lot pleasant events that happened in my life during that time, and part of why it was possible was the long, drawn out and leisurely pace of ETO's development. I think ETO is a beautiful, unique and unparalleled game. It's a huge accomplishment on every front for Marina and I, and we're proud of it. Regardless of how it "sold", there's still plenty of players who have deeply enjoyed it and written or talked about it! After the dust settles on a release, that's the most you can hope for. 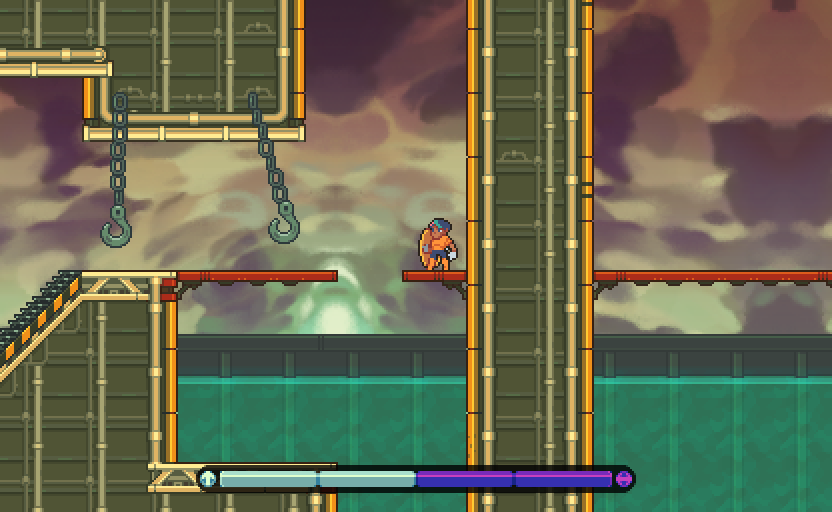 There's sadness, because it took so long to make the game. I'm a proponent of not working too long on one thing, and I feel like if I was wiser about game development, I could have saved a year or two for other projects. This doesn't bother me on a daily basis, but it's unavoidable to think about whenever I load the game up and try to play.

But... without Even the Ocean, we wouldn't have learned how to make something like Anodyne 2 relatively quickly, or our current in-development game, "S". Even then... when I do play ETO, I rarely make it past the first day at Whiteforge. Part of it is a fatigue that never seems to leave: I tested the cutscenes and played through every level more times than I can count, so, well... getting through the gauntlets can be boring! (Oh wait, maybe this is time to use "Story Mode"! Ha ha ha.) I tend not to replay games. But I do want to replay ETO one day! I don't remember the dialogue word-for-word, and I'm curious how I'd feel about the game now.

I find myself replaying the postgame of ETO more than the actual game. There's something quiet, dusty and eerie about the digital layers buried under ETO's main game. When you play ETO, you're actually mostly seeing Marina and I from 2015-2016. But the postgame is a ton of work we both did from 2013-2014! Those green debug blocks, directionless and chaotically-designed levels were a lot of my daily digital life at the time. I can feel a lot of the more chaotic elements from our lives at the time: moving around the country, meeting new communities, grappling with post-college life and reflecting on our recently released Anodyne. 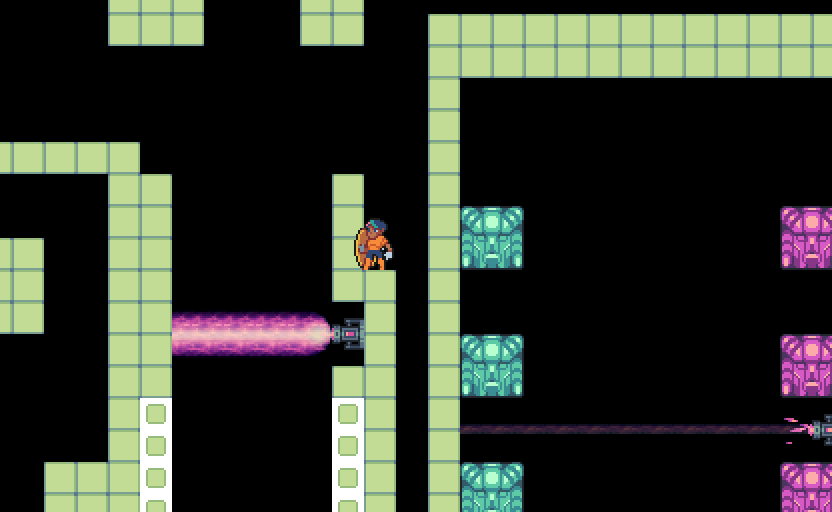 Writing about this makes me think... When you buy Even the Ocean, you're actually getting two games. Even the Ocean, of course - but also, "The Old Ocean": an imperfect, unfinished, experimental collage; a prototype, mirror image to Even the Ocean. The Old Ocean is the kind of game that carries an meta-commentary on the 'final' game, it's the kind of meta stuff in games I like to think about. But... it's also the least popular of our postgames! It's my favorite, though. Maybe because it feels like a well-preserved, personal time capsule, diary entry, photo album. Even though much of it is unplayable, I do like the chaotic, labyrinthine and sparse feeling of The Old Ocean's levels, as well as the the heavy degree of abstract expression some of the levels carry, through only green debug blocks. I love the big desert with flying sand, climbing into the old Geomes, walking deeper and deeper across abstract world maps, guided only by Marina and I's strange avatars. I still believe that if you can make an intriguing space with debug art alone, that's a great basis for actually adding the final art. 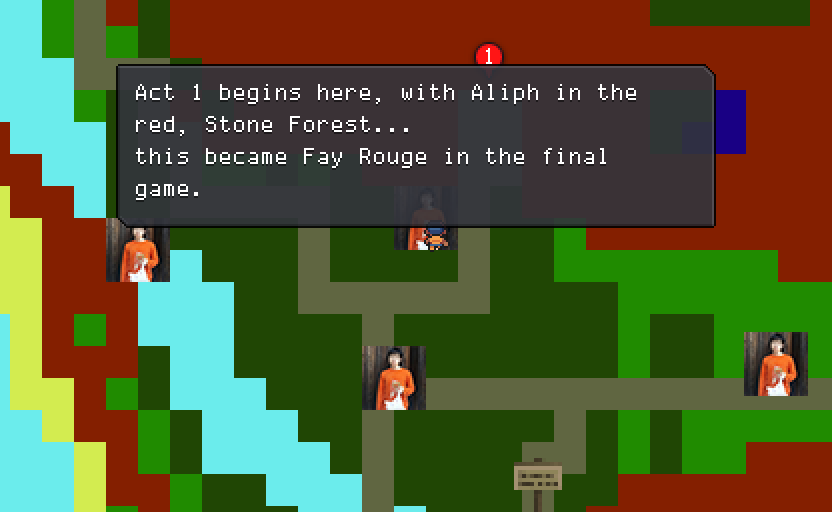 Of course, I could just be thinking of "The Old Ocean" as a separate game to make myself feel more productive, like I released "The Old Ocean" in 2014, then 2 years later, Even the Ocean in 2016! Who knows... something something defense mechanism. Working in a studio of 2 makes my relationship to 'productivity' always a bit complicated, but I think as I get older I've become more relaxed about it.

Well, maybe I ought to play Even the Ocean again! The platforming is still quite well-crafted. Aliph has an excellent weight and control, and the Light and Dark energy alignments both feel really fun to use. The music and art help to conjure a world reckoning with coming ecological disaster, each NPC's line of dialogue is written partially from our lives at the time. Aliph scrambles and jumps and walks through seaside resorts, rural towns and dead continents, hoping her efforts will be enough to save her world, and, even though they ultimately aren't - maybe her efforts can help another world outside of hers...

Anyways, back to working on S. Thanks for reading this and celebrating ETO's anniversary with us! If you've read this far you should join our newsletter (https://analgesic.productions/) or Discord! (https://discord.com/invite/analgesic) 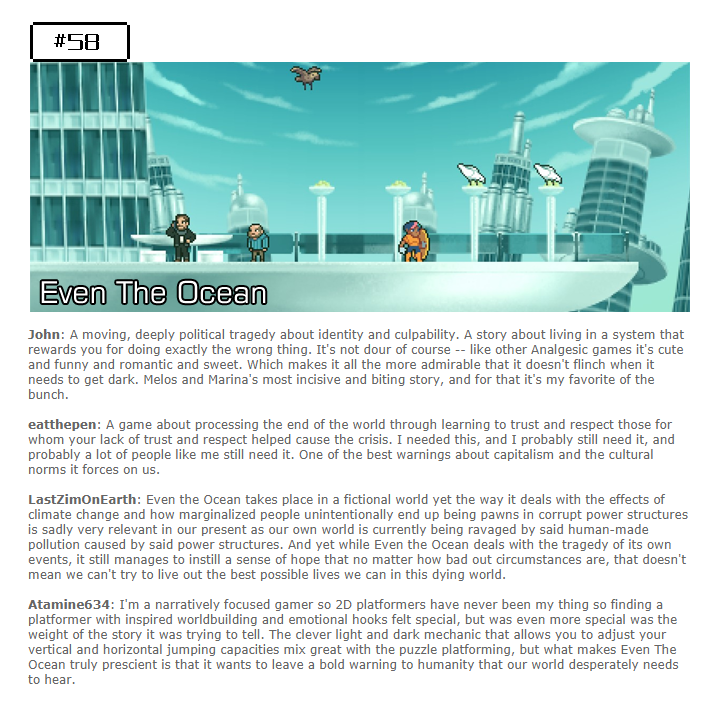 I enjoyed the Socks Make People Sexy community's games of the decade list, which is enormous and varied. Even the Ocean coming in at #58 was quite a treat!

And here are some words from Amr Al-Aaser, writing for RPS a couple years after the game's original release:

"The game’s core is in the subtle ways it reinforces its story with its puzzles, without a moment of combat in sight. But being free of combat doesn’t mean it’s free of violence. Here the violence is structural, rather than physical. It’s a story about who we harm on our climb up society’s ladder, and the ways we reinforce harmful structures to support ourselves."

Even the Ocean's recent hop to consoles comes consistently recommended by critics, so be sure to check this one out if you missed it... there's just nothing quite like it! And please let us know if you have any fond memories of Even the Ocean. Thanks for reading! 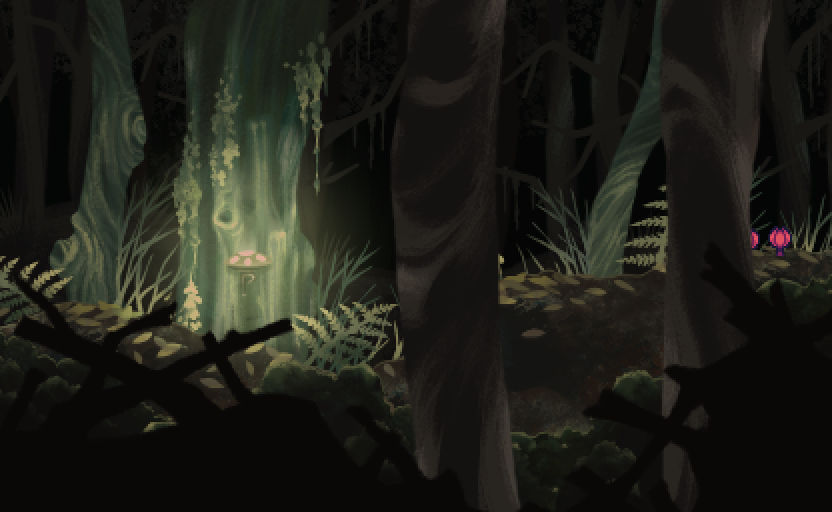